I’ve never considered myself a luddite, but in the past couple years I’ve re-evaluated my use of personal electronic devices and have made choices based around the notion of “satisficing.” For some, the devices I use might seem downright regressive, but they satisfy my level of need / want without feeling like I’m either depriving or indulging myself.

The most significant switch I made in this age of the smartphone was going to a feature phone, or as I like to call it “a phone of average intelligence.” When I bought a tablet a few years ago (the now discontinued Google Nexus 7), I was using my smartphone less frequently. When I did use it to go on the Internet, I found it increasingly frustrating compared to the speed and size of the tablet. So rather than try to find a faster and bigger phone, I opted for a device that can just make calls and send text messages, things I do infrequently, but have a need for like anyone else. I also switched my carrier to Ting, a non-contract carrier that charges you based on what you use. I’m a pretty low volume caller and texter, so my phone bill has worked out to around $16 a month for the last year (I’d be paying at least double this to keep a smartphone).

The only time I’ve found a need for mobile data is when we travel. My wife has a smartphone, so that usually covers the bases. If I were to spring for mobile data, I’d probably get a mobile hotspot over a phone, which would allow me to use my tablet on-the-go. I haven’t reached a tipping point for that yet, since I don’t travel by myself very often, but I’d probably get something like the Karma, another pay-for-what-you-use mobile service provider. 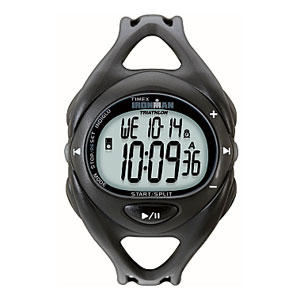 Great for timing contractions and seeing what time baby woke up for a feeding.

About a year ago I also started wearing a wrist watch again. The main reason I dug out my Timex Ironman was because we were getting ready to have a baby and I wanted something easy to look at to time contractions. Having a watch also turned out handy for life with a newborn and the habit just (re)stuck after that. However, this doesn’t mean I see any use for a smartwatch, especially since I don’t have a companion phone for one. I do think it’s interesting that at one point cell phones effectively did away with wearing something on your wrist, and now it’s come back, after a fashion.

The final piece of personal satisficing I want to share concerns my home Internet service, which I get through Comcast. At one point I had a phone and Internet bundle, but did away with the phone part and kept the Internet (which I now understand is very hard to do unless you get really aggressive with the Comcast customer service rep). Not only that, I downgraded the Internet speed to the “Performance Starter” 6 mbps download / 1 mbps upload speed.

For the most part this is more than enough for our uses – the only time the speed is noticeably slow is when I’m uploading photos to Flickr, but I can easily walk away and come back to it when it’s finished. Streaming content from YouTube and the like is also plenty functional. I know I’m not getting the best deal for the performance, but the alternative is having a decent – but short-term price – and then having to get on the phone and renegotiate my rates after that term has ended. Suffice it to say, I HATE doing that sort of thing and not having to deal with customer (lack of) service on a regular basis is worth much more to me in terms of quality of life and sanity.

If you want to learn more about satisficing, a good place to start is Barry Schwartz’s “The Paradox of Choice.” The book is on my list of favorites (though admittedly the first chapter is kind of tedious as he lists all the choices we have about jeans, laundry detergent, etc.).

Also, check out this TED Talk:

I’ve been looking to try a new theme to freshen things up a bit, but had some difficulty finding something I liked as well as Lightword. I finally settled on Arclite, but not without some tweaks. Frankly, there are a few things about the design that had me scratching my head. The worst is the look of the submenus, but my distaste for it kind of forced me to be a little cleaner in how I organized my Photography page.

Here are the CSS overrides I wound up implementing:

UPDATE: The Late Night video expired, so I replaced it with Phantogram’s video for “When I’m Small.”

One of the reasons I was digging out Phantogram pics was because of their TV debut last night on Late Night with Jimmy Fallon! Usually first time live TV performances are a bit laced with nerves, but they didn’t show it. Unless Sarah Barthel’s endearing head shimmy is a nervous tick.

In what seems to be my lifelong pursuit of a close but comfortable shave, I gave the retro stylings of a double-edged razor a try after many years of compromising with an electric. While no doubt an impressively designed and machined grooming tool, the mass produced and commercial Mach 3 razor ultimately gives me as good a shave. The Merkur can of course do more damage if I’m not careful, and I admit there is a certain enjoyment in that risk, or perhaps in the successful avoidance of major bloodletting. But for my regular grooming routine I think the Mach 3 meets all the requirements. For the novelty and enjoyment of the shaving experience I’ll use the Merkur, but I suspect those occasions will be few and far between, not unlike my feasting on filet mignon and 50-year old Scotch.