I was introduced to John Prine through Iris DeMent. She was his opening act in a show at the Hult Center, and I so wanted to see her perform that it didn’t matter I knew nothing about who she was touring with, and figured I could leave early if I didn’t care for his music.

It didn’t take long for Prine to win me over. His irreverence, turn of a phrase, and unique perspective had me either chuckling (Let’s Talk Dirty in Hawaiian) or choking up (Hello in There).

As I dove into his music catalog, trying to catch up with the rest of the world, I realized I became a fan at just the right time, when age and experience had deepened and textured his voice to a quality that I preferred. And it was lucky for me that he had no plans on stopping his work, putting in another 20 years of touring and songwriting before being taken from us by complications from COVID-19.

In those 20 years, I turned my dad into a mutual fan, went to at least a half dozen more live shows, with my parents now joining me, and generally been amazed at what a juggernaut Prine was despite multiple battles with cancer and increasing age. I was really hoping he would pull through his bout with COVID-19, just so I could hear the song he would inevitably write about the experience.

Rest in peace, John Prine. I’m glad I took a chance on you.

UPDATE: I ran across my stash of old concert ticket stubs, and found the one for Prine and DeMent at the Hult Center. 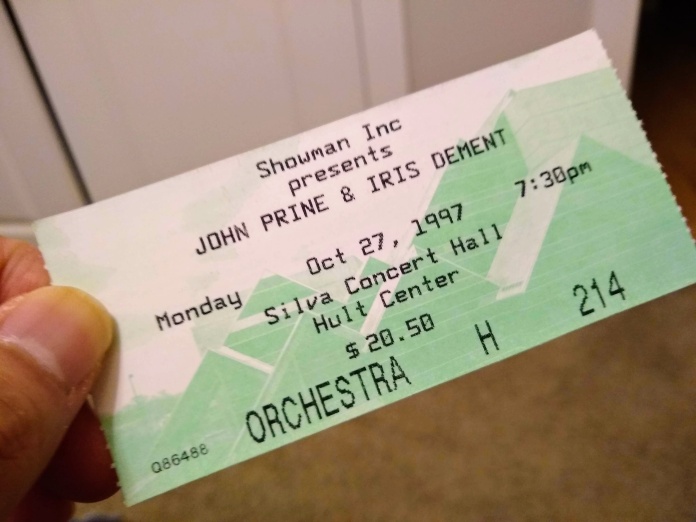