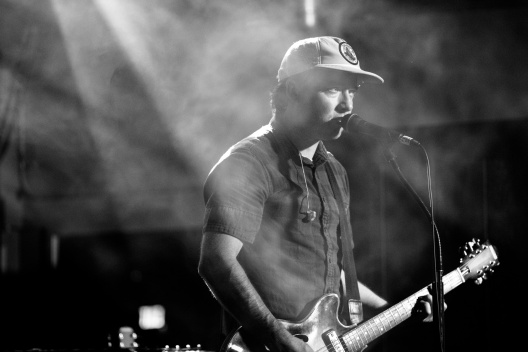 I heard about San Diego rock and dirty blues duo Little Hurricane from photographer Neil Van Niekirk, who posted accolades for the group on his Facebook page. When I gave their latest album a listen, I was instantly drawn to Tone Catalano’s textured vocals (and most people know I don’t usually gravitate to male singers). I also connected with the band’s fully formed, blues-rock style, backed by the beats of drummer CC Spina. About a year later, a concert venue called Hi-Fi Music Hall opened up and Little Hurricane eventually popped up on their calendar, making for an obvious ticket purchase, even though most rock concerts are scheduled way past my bed time these days. Still, discovering new music and then getting a chance to see the performer live (and maybe shoot the show) has always been one of my favorite parts of being a music lover.

Hi-Fi Music Hall took over the building I will always know as the Rock ‘n’ Rodeo (that information may date me quite a bit). Although I never really stepped foot in the building before, I got a strong sense a lot of work had been done to it, for the better. The space was clean and nicely laid out with the music hall on one side and a full service bar on the other. The bar even had a small stage for another band to entertain patrons, set behind a pull-down screen used to project a video feed from the music hall.

The hall itself was set up for standing room only, but there weren’t more than about 50 of us there. That is probably my chief lament about Eugene, in that cool, new acts will come here, but once they get more of a name for themselves, they won’t tend to come back because Portland will be considered the more viable market. I can’t blame them — musicians need to make a living and drawing in a Eugene-sized audience doesn’t make financial sense after awhile. From a photography stand point, it does provide some nice opportunities, not only in being able to shoot acts early in their careers, but also having largely unfettered photo access. It seems like the more prominent the performer, the more restrictive they’ll be about photography, so newer acts in combination with small venues tend to be the most tolerant of my bringing along my DSLR.

The lighting for Little Hurricane was somewhat challenging, in that Tone was often better lit than CC and her faster movements in a darker area of the stage meant many attempts trying to capture very fleeting moments and expressions. Remote controlled LED effect lights and smoke machines created some nice atmosphere, but the main lights were still a bit dim and tended toward uniform blue or magenta color washes. Fearing the venue would favor a spartan lighting scheme, I packed the 85mm f/1.8 as my primary lens, rather than a slower (and much larger) f/2.8 telephoto zoom. Consequently, I was able to shoot as high as 1/160 for most of the show and with minimal focusing or exposure problems. Given the band’s musical aesthetic, post-processing the images for high contrast black-and-white seemed the most fitting, though I may produce a color version of the selections down the road.